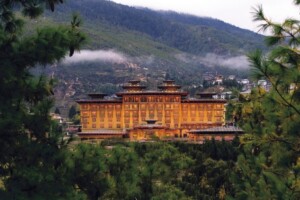 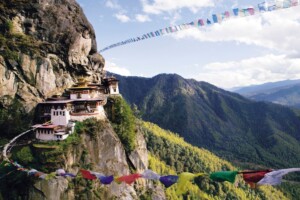 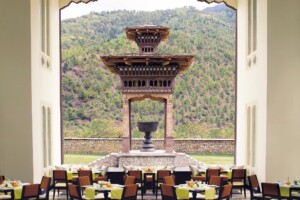 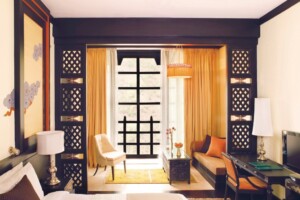 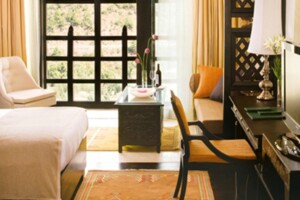 The ambrosial Kingdom of Bhutan, also called The Last Shangri La on Earth, is an ancient empire secluded high in the Himalayas with a unique culture and traditional people with strong beliefs. Bhutan can be accessed by road from Phuntsholing, which adjoins the Dooars region of India, as well as by air from New Delhi, Kolkata, Kathmandu, Bangkok and Dhaka. The stunningly picturesque Thimphu Valley is immersed in this charming Mountain Fortress of the Gods. Overlooking the mesmerising Wang Chu river, Thimphu boasts a pristine environment, spellbinding scenery and architecture, and warm, hospitable people. Nestled in the heart of this valley lies the magnificent Taj Tashi, the gateway to a magical land brimming with fascinating mythology. Our 5 star hotel in Bhutan is ideally situated for you to explore the kingdom’s spectacular monasteries, centuries-old street festivals, scenic mountain passes and pristine wilderness. The international airport is situated at Paro, an hour from Thimphu. Staying true to Bhutan’s ancient and alluring ways, our hotel in Thimphu enchantingly blends Dzong architecture and modern design, and is adorned with classical hand-drawn Buddhist murals. The 66 spacious rooms and suites overlook the exquisite mountains and township, and capture the essence of Bhutanese art and architecture. 2 restaurants, a tea lounge and a Bar focus on a different aspect of Bhutan’s vibrant Mahayana Buddhist culture. Unwind with a drink at Ara, the bar that gets its theme from the dramneyn, a Himalayan folk music instrument. Savour Bhutan’s most popular dish, Ema Datshi, and other Bhutanese cuisine at Chig-Ja-Gye. Sip Suja, Bhutan’s distinctive ‘salted butter tea’ at Rimps, the tea lounge, and sample delectable European or Bhutanese dishes at The Thongsel, the all-day-dining restaurant. Try Bhutan’s fiery cuisine, gaze at the mesmerising prayer wheels, explore the vibrant local markets, and relax with a special Bhutanese Hot Stone Bath at our Jiva Spa. Stay ensconced in the Taj’s legendary hospitality, borne of a century of practice and an utmost focus on you. Come, enter the gateway to paradise on earth.